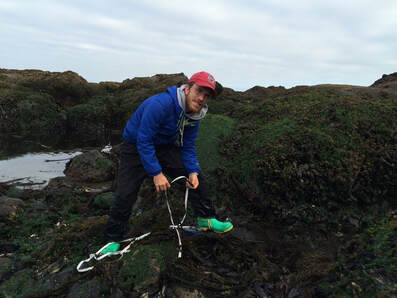 I grew up playing in the salt marshes and tidal creeks around James Island, South Carolina, a barrier island that sits on the historic Charleston Harbor.  Early exposure to the diverse lifeforms of the salt marsh ecosystem fueled my curiosity and passion for biology.  I attended the University of South Carolina where I studied biology and  conducted undergraduate research with mentoring from Dr. Brian Helmuth, Dr. David Wethey, and Dr. Fernando Lima. While at USC, I served as editor for the university's online journal featuring undergraduate research in Marine Science (MarSci), I was a member of the university's marching band, The Mighty Sound of the Southeast, and I was a member of Kappa Kappa Psi, a national honorary band fraternity dedicated to the service of college and university band programs.

After completing my undergraduate degree  in Biological Sciences (2012), I started a doctoral program in Integrative Biology at the University of California - Berkeley with Dr. Mimi Koehl.  As a graduate student, I participated in outreach programs, served as a co-organizer of the department's Women in Science group, and served as a leader in the department's Graduate Student Association.  I received my doctorate in 2017 and moved to Davis, CA to start my current postdoctoral position at the University of California - Davis with Dr. Stacey Combes.  In addition to my research and mentoring of students in the laboratory, I also serve on the Broadening Participation Committee for the Society for Integrative and Comparative Biology