In general, I want to understand how physical stress in the environment interacts with the performance and ecology of organisms.  I am particularly interested in the effects of fluid flow, such as waves and wind, on the performance and ecology of habitat-forming vegetation and the animals that live on and around the vegetation (e.g., herbivores, pollinators).  My research uses the techniques of biomechanics, ecology, physiology, and behavior with study systems ranging from wave-swept seaweeds and herbivores to wind-blown plants and pollinators.

In my postdoctoral research at the University of California - Davis, I study how the flight performance of bees is affected by wind and by the cluttered vegetation in their habitat.  Together, wind and clutter present flight challenges for bees, and flying is an important part of the pollination services that bees provide to wild plants and crops.  My research examines how the presence and direction of wind, as well as the structure and arrangement of clutter, affect aspects of a bee's flight performance, such as flight path and speed.  This information can help us understand the basic principles governing how bees and other important pollinators move through their landscape - whether on a single foraging trip or dispersing to new habitats - and how those movements might be affected by changes to the wind conditions and structure of vegetation.
Video: Wind and cluttered vegetation can be significant flight challenges for bees. 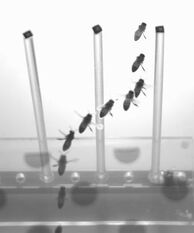 A composite image of a honey bee traversing vertical obstacles (60 ms intervals), viewed from above.
Wind-blown vegetation affects bee flight performance
Wind, even as subtle as a gentle breeze, can cause plants to sway back-and-forth.  While stationary plants act as obstacles for foraging bees, plants moving in wind act as a more extreme dynamic obstacle (i.e., moving obstacle + wind) that can really put the bees' flight capabilities to the test.  I built a dynamic obstacle course in a laboratory flight tunnel to test how obstacle motion and wind (each and in combination) affect the flight performance of bees.  I used high speed video to film the flights of bees as they approached a single row of vertical obstacles moving side-to-side.  Relative to their flight when approaching stationary obstacles, I found that bees approaching moving obstacles in still air (i.e., no wind)  slowed down and made large adjustments to their trajectories.  However, bees approaching moving obstacles in wind -- regardless of the direction of that wind --  increased their speeds and made relatively small adjustments to their trajectories.  Our results suggest that plant motion affects the flight performance of bees (i.e., how fast they fly and the paths they follow), but that the direction and magnitude of those effects depend on the presence of wind. 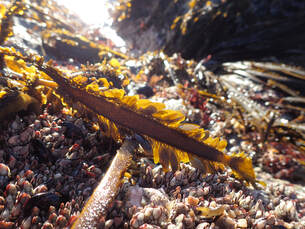 A frond of the intertidal kelp Egregia menziesii
Kelp on wave-swept shores can be damaged if the hydrodynamic forces from waves exceed the strength of their tissues.  During my doctoral research at the University of California - Berkeley, I examined how the mechanical properties of the kelp Egregia menziesii allow the kelp to survive in its wave-swept habitat.  I found that the kelp's tissues are exceptionally strong throughout the year -- some parts of the kelp can withstand forces of 75 Newtons, or the weight of approximately 75 apples, before breaking -- but that the kelp's tissues are strongest in winter (i.e., the season when waves and hydrodynamic forces are largest).  Winter is also the season when the kelp grow most slowly, so the kelp can survive the extreme waves of winter by being exceptionally strong but also by staying small (i.e., hydrodynamic forces typically increase with the size of a body).

Waves tie kelp fronds  into knots & tangles!
I also investigated how the mechanical design of Egregia menziesii influenced its motion in the back-and-forth flow of ocean waves, and I discovered that that back-and-forth flow can tie the long, flexible kelp into intricate knots and tangles.  Those knots and tangles weaken kelp fronds and make the kelp break easily from hydrodynamic forces.  This kind of phenomenon has been observed in climbing rope, cooked spaghetti, and fishing line.

Herbivores wound and weaken fronds
Knots and tangles provide a complex kelp structure with many interstitial spaces that are ideal for herbivores, such as amphipods.  I found that herbivore abundances and wounds from herbivores on the kelp increase sharply with knotting and tangling, and those wounds can further weaken the kelp.  Through long-term monitoring of E. menziesii populations in northern California, I found that knotting and tangling are most common in the autumn, which is also the season when kelp are longest (i.e., kelp grow rapidly in size during the summer) and when waves are increasing in size toward winter.   These results suggest that knotting and tangling could be a passive mechanism by which large kelp are rapidly reduced in size before the extremely large waves of winter occur, and that by reducing their size, kelp are less likely to be completely dislodged from the the shoreline (and killed).

Examples of wounds caused by herbivores on Egregia menziesii